The project started with the purchase of a rolling chassis from an owner in South Carolina. The car was described as having some significant rust issues and was priced very reasonably and acoordingly. We took delivery and moved it into our shop for disassembly. That’s when the fun began.

As the disassembly progressed it became clear that we had a bigger project on our hands than we had anticipated. The car had been advertised as having rust issues in the floor, trunk and one of the inner rockers which was true. Closer inspection revealed that the second inner rocker was also rusty and that, while the rusty areas could be repaired, to do a proper restoration would require replacement of all the affected parts rather than just repairing them. Futhermore, as the car was taken apart, it was revealed that in a previous life, it was involved in some kind of collision. The subsequent repair work was very poor resulting in a uni-body structure that was considerably out of alignment and would require substantial labor to get it square and straight. To make matters worse, the external sheet metal had enough rust issues that, while easily repairable, it looked to make more sense cost wise to simply replace most of it and start with a nice clean base for body and paint work.

At this point, we engaged Scott Brideau from Car Concepts in Nampa, Idaho. We discussed a number of options for moving forward. The easiest option was to simply give up and start over with a different car but the idea of simply relegating another classic car to the car crusher didn’t seem appealing. Because the car had been so severely damaged by rust and was not a particularly rare model, Scott threw out the idea of building a somewhat radical custom yet very driveable design. We quickly settled on the notion of a modern coil over suspension system, rack and pinion steering, and a modern modular engine. Scott’s evaluation of options to accomplish this determined that rather than spending a lot of labor time to repair the floor and inner rockers plus the time to get the car straight, we should consider mounting the body on an independent chassis. Because we were intending to incorporate modern suspension and steering components anyway, buying a complete chassis kit looked to be an attractive choice cost wise.

It was about this time that the “Isadora” concept started to jell. The car was always intended to be a “driver” for Deb. Deb’s eye for styling and color was a very key ingredient to the process as we progressed through the planning stages of the build. As we stated putting our thoughts together, the concept of a one of a kind yet stylish and elegant build began to take shape. Deb coined the car “Isadora” after the early 20th century modern dancer, Isadora Duncan, who was known for her fashion style and ourageous behavior. Ironically, she met an untimely death in a somewhat bizarre accident while riding in an open convertible. 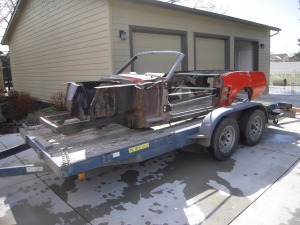 With a basic theme and plan in place, we loaded the car on to a trailer and off it went to Scott’s shop. The transformation of an old rusty hulk into what we now know as Isadora was about to begin.